THE PASSIONATE BOND
OF MUSIC AND DANCE

Flamenco in concert – featuring the stars of the TV show,
“Spains Got Talent!”.
A beautiful love story told by a professional Flamenco dancer and a multiple competition winning violinist, bringing you the world of Spanish Ballet and a classical concert experience spiced with lots of fun, passion and laughter.

Lovestruck violinist dreaming of what the ideal life could be.
Flamenco-Spanish dancer Sharon Lopez and multiple violinist Mate Racz invite you into their world of Spanish dance and virtuoso violin, telling a story with lots of passion and drama.

An exciting show performed by a talented flamenco-spanish dancer and a hungarian violinist.

Dancer
Sharon Lopez began her artistic education at the age of 7, when she started to take classes at Genaro Arteaga Dance School, Tenerife. At 12 years old she moved to Tarragona to continue her Spanish ballet studies at Artemis Dansa Academy in parallel to her academic studies. At 14 she decided to give all her dedication to the world of dance and spent the next 5 years studying the theory as well as practical dance training. She was taught by many famous Spanish dancers and teachers, including "El Grillo", Juan Carlos Lerida (former company dancer Joaquin Cortes), the "Tato" Francís (BNE dancer), Lola Sornichero, to mention a few. During this period Sharon won a number of awards in several national competitions including 1st prize fusion group: Carcassonne (2004), 3rd prize in 'escuela bolera': Tarragona. (2005), 1st prize Flamenco: group dancing, Tarragona (2006), 1st prize in 'escuela bolera': Lleida (2006), 1st prize stylistic performance:
Tarragona. (2007), 1st prize Flamenco Marina D'or. (2008). At the age of 17 she was accepted at the Conservatory of Dance in Madrid, where she went to complete her undergraduate studies. At the same time she was studying for her Masters Degree in Administration and Finance. IN Madrid she had the opportunity to attended workshops and classes learning from the best professors of dance at the "Amor de Dios", the best Flamenco school in Spain. Whilst studying she was also performing, then in 2010 after graduating, she successfully auditioned for the dance company "Passionatta" which performed on major cruise lines. Following this Sharon joined "Maestranza Spanish Ballet Company" and performed for over 4 years on three continents. At the same time she continued to give dance lessons at various dance schools in Tarragona and Madrid. She now devotes all of her time to "Duo Esencias" where she is the founder and Artistic Director.
Previous
Next

Violinist
Máté Rácz is a Hungarian-born violinist. He started to play the violin at the age of 4 in Szeged. In 2001 he began his studies at the Kodály Conservatoire in Kecskemét and then continued at the Conservatoire of Győr with Professor Svikruha Marta. In 2007 he won a scholarship to the Royal College of Music, London studying under Jan Repko and Dona Lee Croft with whom he studied for 6 years and gained his Masters degree in 2013. In 2011 he also won the Sir Charles Mackerras Scholarship in Orchestral Leadership which enabled him to study at the Royal Welsh College of Music. Since graduating, as a soloist he has played with prestigious orchestras, such as The Havilland Symphony Orchestra, Berkshire Maestros, Gyori Szimfonikus Zenekar, London-Vienna Chamber Orchestra and  Orquesta Sinfónica de España. In 2014 Máté moved to Madrid to work with the Orquesta Santa Cecilia playing in some of the largest auditoriums in Spain.
He has been awarded several international and national prizes for his craft, such as winner of the Lipitzer International violin competition in Gorizia, Kloster; Schöntal International Violin Competition; Zaturecky Hungarian National Violin Competition; Kingston upon Thames Festival of the Performing Arts; Ealing Festival Concerto Competition; the Bach Prize and Hatfield Music Festival. Máté is Cofounder, Musical Director and Composer of Duo Esencias. He is also a member of London’s well known comedy string quartet Graffiti Classics who perform weekly in some of the most renowned theatres and festivals around the world. He attended master classes with venerated violinists such as György Pauk, Eszter Perényi, Béla Katona, Peter Esswood, Barnabás Kelemen, György Somogyi, András Kis and Dénes Kovács and has lead many youth and professional European orchestras such as RCM Symphony Orchestra, RCM Sinfonietta, Gyor, Kecskemet and Szeged Symphony Orchestras, Viennese
Mozart Orchestra and RWCMD Chamber orchestra; under the batons of Ashkenazy, Salonen and Jurowsky, performing throughout the UK, Eurpoe and Asia. In 2013 he has met his partner whith whom in 2015 created a new project called Duo Esencias. Mate is the musical composer, founder and one of the active performer of Duo Esencias. They travel the world and perform on different cruise-lines and theatres to follow their dreams.
Previous
Next

We are always open to interesting projects.
Send us an email for more information.
Contact Us

The passionate bond of music and dance
Studio Live Outdoor

Click on the link below where you can directly download our press kit including our posters, flyers, logos, biographies, promo-video. Please note that the file is in Zip format.
Download246 MB 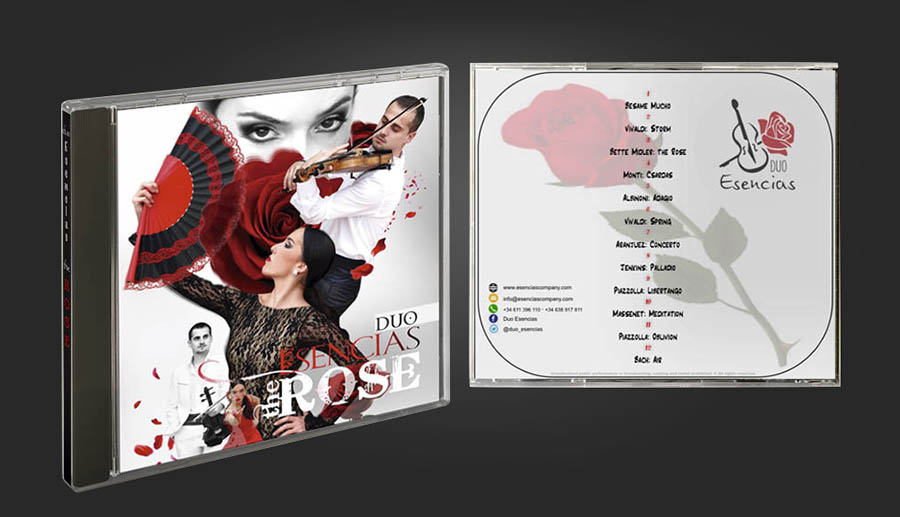 If you want to get a copy of our CD, please get in touch.
Contact Us

For any inquiries please email